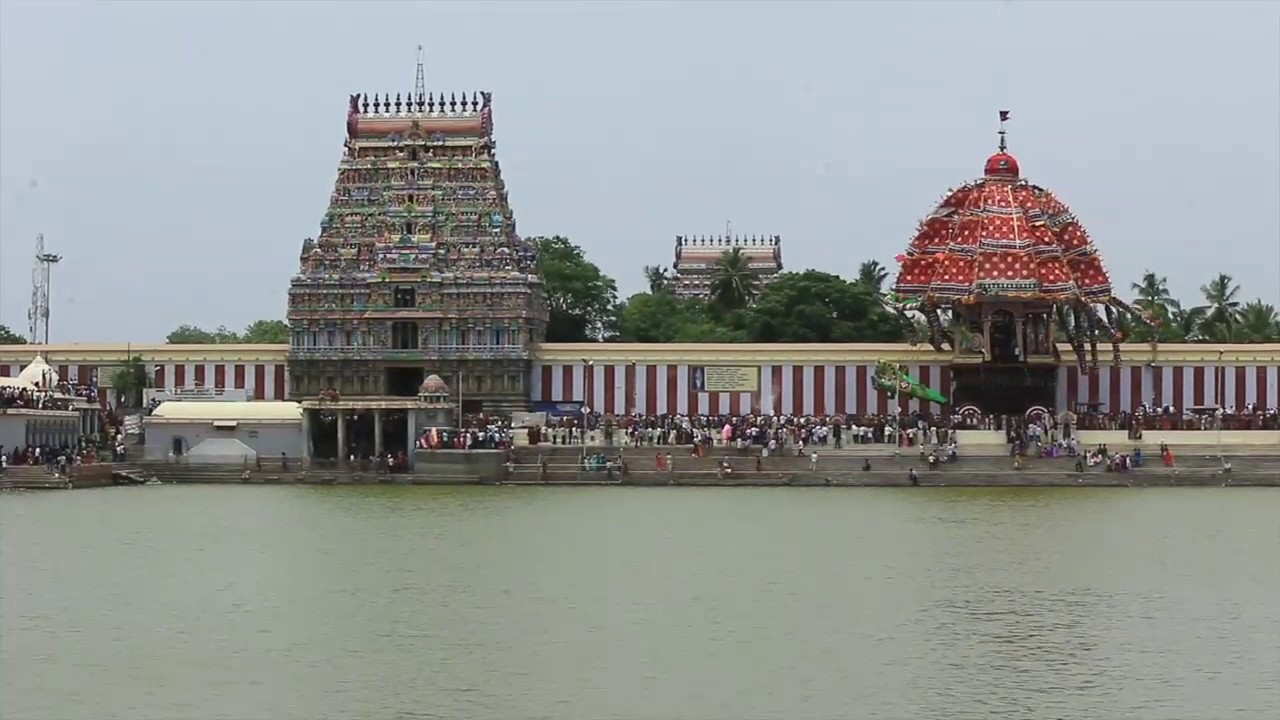 Thiruvarur - World Heritage Monument : The Thyagarajaswami Temple, dedicated to Lord Siva is located here. The biggest Temple Car [Chariot] called as “Aazhi Ther” in Tamil, is a specimen of magnificent workmanship and its beauty is still an attraction to many millions of pilgrims. The Car Festival of the temple is celebrated during March-April, every year. Kamalalayam Tank adjacent to the temple in a 25 acre area, is one of the largest temple tanks in the State. Muthupettai fulfills the blessings of Nature and the presence of Bird Sanctuaries in Udhayamarthandapuram and vaduvur attracts the tourist in large numbers.

Incidentally, Tiruvarur is the birth place of the great Music Trinity Sri Thagaraja Swamigal, Sri Shyama Sastrigal and Sri Muthuswamy Dikshitar. Mannargudy, Enkan, Koothanur, Alangudi are important religious centres nearby Thiruvarur. Thiruveezhimalai, Thirupampuram, Tirumeichur, Srivanjiyam, Tillaivilagam and Thirukkannamangai are the most important, popular and beautiful Temple sites of this district. There is an Art Gallery that exhibits the Collections to show case the greatness of Manuneethi Cholan. Panchamuga and Pari Nadaswaram the enthralling musical instruments of the long past, still continues to be played and patronized.

How to reach Thiruvarur

By Road: Options are many. From Government Run Transport Services to touch nearby places and other parts of the State. By Rail: Thiruvarur Rly Stn By Air: Nearest Airport at Trichy - 118 Kms from here.

The Thyagarajaswami Temple, dedicated to Lord Siva is located here. The biggest Temple Car [Chariot] called as “Aazhi Ther” in Tamil, is a specimen of magnificent workmanship and its beauty is still an attraction to many millions of pilgrims. The Car Festival of the temple is celebrated during March-April, every year. Kamalalayam Tank adjacent to the temple in a 25 acre area, is one of the largest temple tanks in the State.

It is 16 Kms from Kumbakonam on the Kumbagonam – Valangiman road. This temple is dedicated to Lord Guru [Jupiter]. He is also known as Brihaspathi. Students worship Guru to bless them for their excellence in education, fine arts and wisdom. This Temple of Lord Guru is a part of Abathsagayeswarar Temple. It is believed Agasthiar and Adi Sankara, both worshiped Lord Guru here. People visit this temple during transition period of Lord Guru from one zodiac sign to another from time to time.

It is 21 kms from Thiruvarur on the Myiladuthurai – Thiruvarur road, near Poonthottam. It is the only temple for Goddessess SARASWATHY [Goddess for Education and Wisdom] in Tamil Nadu. Kavi Chakravarthi Kambar and Ottakoothar offered their prayers to Saraswathy in this temple. Navarathri is a grand festival celebrated here. Special Saraswathi Puja is performed on the 9th day, called as Maha Navami of this festival to invoke her blessings.

It is on the Thiruvarur – Thanjavur road. There is a special temple dedicated to Lord Subrahmanya. Raja Raja Cholan I has created a permanent endowment to maintain this temple. Saint Arunagiri Nathar composed hymns collection called Thirupugazh. Lord Subrahmanya is seated on Peacock inside the beautifully built Sanctum Sanctorum. Thaipoosam is the colourful festival of this temple.

This is also called as Rajamannargudi. It is said that Mannargudi Temple and Temple tank are two inseparable and beautiful highlights of the town. Kulothunga Cholan Vinnagaram or the Rajagopalaswamy temple is called as the King of Temples. Here, Lord Vishnu is called as Rajagopalan or Rajamannar. There are 24 shrines, 18 vimanams, 16 majestic towers, 7 splendid big halls and a 154 ft towering Rajagopuram are the special features of this large temple complex.

Valangiman Varatharajan Pettai Maha Mariamman or Seethala Devi Temple is located 9 kms from Kumbakonam on the Mannargudi Road. Devotees follow an unusual prayer ritual carrying Paadai [ a decorated Bamboo Stretcher] – usually used for carrying a dead body for burial. This ritual is performed as a gratitude by sick people, cured by the grace of Seethala Devi. Because of this, the temple is also called as Paadai Kavadi Mariamman temple. The temple performs special pujas on Sundays of Tamil month Avani [Aug –Sept].

The seven hundred year old dargah here has many glorious aspects and traditional background. This dargah known as Andavar Shahul Dawood Khamil Oliyullh was built in Marattah style Architecture. Pilgrims beyond the barriers of Caste, creed and religion visit this holy Islamic place of worship.

Muthupettai Mangrove Forest / Lagoon also called as the Alaiyathi Kadu, one of the largest of its kind located between Thirutturaipoondi and Pattukkotai. Paminiyaru, Koraiyaru, Kilai thaangi yaaru, Marakka koraiyaru; all these rivers form a lagoon before ending up at Kodiakarai [point calimere]. The lagoon is 8 kms from Muthupet in an area of 120 sq.km. Palanjur, Thamarankottai, Maravakkadu, Vadakadu, Thuraikadu and Muthupet reserve forests are the composition of mangrove forests. The collection of trees include Thandal, Thillai, Narikanthal, Neermulli and so on. A 162 mts wooden causeway built across, provides an opportunity for a closer look at the mangrove forests. Variety of Migratory birds from Europe, Asia and Middle East flock to this area during season. It is a holistic, exotic and refreshing holiday option for nature lovers.

It is a 45 km² protected area in the District of Tiruvarur. It was created in 1998 and more than 10,000 migratory Birds visit here during monsoon season. Notable among them are Painted Storks, Herons and Open Bill Storks. Best suitable months to visit this sanctuary are November, December, February and March.

It is 25 kms from Thanjavur and 30 kms from Thiruvarur. Vaduvur Bird Sanctuary is located in the Vaduvur Lake area and was created in the year 1999. More than 20,000 birds of 40 different species of water birds visits this place during the season. The sanctuary has basic facilities for tourists to stay overnight and watch the birds from the two watch towers available here. For more information contact: Forest Range Officer: 04366 – 235062.