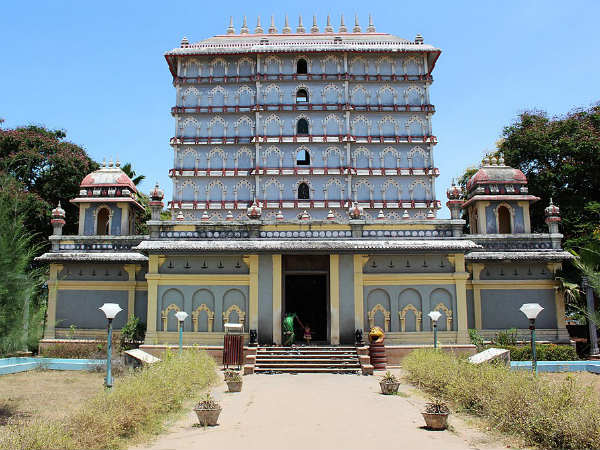 It is called as Poompuhar or Puhar : Puhar in tamil means the ‘estuary’ of river in the sea. Poompuhar is located close to the spot where the river Cauveri flows out into the sea. It is a town in the Sirkali Taluk, Nagapattinam District of Southern Tamil Nadu. This ancient port city earlier called as Kaveri poompattinam, served as the Capital of early Chola rulers. Original town destroyed by sea and submerged presumably in 500 AD was rebuilt after that. Ancient Pottery and figurines dating back to the 4th century were recently found in ASI excavation. Emperors like Sembiyan, Muchugunda, Manuneethi and Karikala of Chola Dynasty added glory to Poompuhar.

National institute of Marine Archaeology confirms through its marine archaeological researches, that, much of the town was washed away by progressive erosion and floods. Submerged wharves and lengths of pier walls have been excavated in the recent times. They match the literary references to Poompuhar. Buddhism flourished in Poompuhar two thousands years ago. Pillars erected during 2nd century BC had the inscriptions Kangitha Somaya Pikunia Thanam. It means “This pillar was donated by Somaya Pikkuni of Poompuhar” Masilamani Nathar Koil was built in 1305 by Maravarma Kulasekara Pandiyan which bore the sea erosion and 7 storied structure dedicated Silapathigaram Art Gallery focusing on Sangam literature are the two important landmarks that impresses all the tourists visiting to this town. The best time to visit Poompuhar is between December to February. It is also known to be the oldest inhabited area in Tamil Nadu. Poompuhar of today has a population of 86,155 (2011 Census).

By Road: Poompuhar is connected to Mayiladuthurai and Sirgazhi by road. The distance from Poompuhar to Mayiladuthurai is 24 kms and to Sirgazhi, 21 kms Tourists from Chennai to Poompuhar by private carriers can take the route via Tindivanam, Pondicherry, Cuddalore and Sirgazhi. Those who come from Madurai, Ramanathapuram and Tirunelveli may proceed via Melur, Tiruppathur, Karaikudi, Tharangampadi and Akkur. They can also come via Pudukkottai, Thanjavur, and Mayiladuthurai. By Rail: Tourists have to alight at Mayiladuthurai Railway Junction, to proceed to Poompuhar by road. Visitors from Chennai who travel by train have to get down at Sirgazhi. By Air: Trichy [160kms]

The Silappathikaram Art Gallery is a seven storied, classically built structure. The first floor of this building is 12 ft high and all the other floors have a height of 5 ft each. The tower comprises of Kalasams having a height of 8 ft, which brings the total height of this gallery to 50 ft. At the entrance of this gallery, there is a 22½ feet 'Magara Thoranavayil' has been designed on the pattern of Magara Thorana Vayil, found in Suruli Malai Mangala Devi Temple. The Anklet shaped tank within the building premises, has the statues of Kannagi and Madhavi on the sides of these tanks. The arte facts in this gallery comprises of scenes from Sangam Epic Silappathikaram. They were created by the sculptors of Government College of Architecture and Sculpture of Mamallapuram, and remains the treasure house of Tamil culture. Timings : 8:30 am to 1:00 pm and 2:30 pm to 8:30 pm

It is nothing but a monument referred in the epic Silapathigaram. In Silapathikaram, Devanthi, the friend of Kannagi, told her about the Elanchi. Mandram Situated in the Confluence of Cauvery into Bay of Bengal. It is a park where Neydarl filed opens its petals and where two sacred tanks are dedicated to the Sun and Moon. These miracle tanks cured all the diseases. And also believed to bring harmony between husband and Wives.

The Stage in which the arrangement of Madhavi took place was chosen in accordance with the time honoured tradition set by the architects. The Canopy was painted with many beautiful pictures, from which were hanging loosely set garlands of pears. It showed the novel and attractive appearance, which the stage presented.

It is situated 2 kms away from Poompuhar estuary. The temple is dedicated to Thiru Sayavaneswarar and Iraivi Kuyiliamman Nanmozhi Ammai. This is a Padal Petra Sthalam where the Nayanmars [saivaite Saints] had sung Hymns in praise of Lord Siva. Chola inscriptions are found in the temple.

This is an ancient and very beautiful temple. Iyarppakai Nayanar and Pattinathar were born here. Kovalan and Kannagi of Silapathigaram were also born here. Saivite Saint Thirugnana has glorified this temple in his hymns.

It is 7 Kms from Poompuhar. The Presiding deity here is Lord Siva named as Swetharanyeswarar. A separate Shrine of Budhan also called as Saumyan is the planet Jupiter in English, located inside the Thiruvenkadu Temple. This temple has reference in Valmiki Ramayanam too and believed to be over 3000 years old. Lord Budhan is said to bestow wisdom and intellect.

Called as Akkur / Akkoor is located in the Tranquebar Taluk. The Thandthondreeswarar Temple dedicated to Lord Siva is located here. This is the place where Lord Siva gave darshan to Sage Agasthaya in Wedding Form. Nayanmars have glorified this temple lavishly.

This antique temple is referred to as Thirusumponpallu in the Thevaram hymns. Cauvery is the principal river of this region. It is on the Tharangambadi – Mayiladuthurai road. Swarnapureswarar Temple , Shanmuga Subramaniaswamy Temple , Sengazhuneer Vinayagar Temple, Aadhi Narayana Perumal Temple , Vaithyanathaswamy Temple are located here.

It is also on the Tharangambadi-Myladuthurai road 16 kms from Poompuhar. Lord Shiva graces in the temple as Swayambumurthi, is called as Amirtha Kadeswarar. This is exactly the place where Lord Siva prevented Yama from extracting the life of 16 year old Markandeyan, hence Siva is also called as Kala Samhara Murthy. Though the presiding deity in the sanctum sanctorum is in the form of Lingam , a closer look is believed to portray the above concept. Devotees celebrate their, Ukra Radha Shanti (completing 59 years) , Sashti Aptha Poorthi (completing 60 years) Beemaradha Shanti (completing 70 years), Sathabishekam (completing 80 years), the important stages of the life, pray to the Lord and to seek Mother’s blessings for Longevity and Good Health.

It is a small village near Thirukkadaiyur, where the Dasabuja Veera Anjaneyar [ with 10 hands ] is located and visited by thousands of Pilgrims.

This is located on the Mayiladuthurai - Sirkazhi road, 24 kms from Poompuhar. Saivaite Hymns refer this place as Pullirikkuvolur. Vaithyanathan , Thaiyal Nayaki and Muthukumarasamy [ Murugan] are the important Deities of this Temple. This is worshiped as the ANGARAGA/ SEVVAI Navagraha Sthalam. A dip in the Sidhamirtham tank in this temple is believed to cure all the diseases.

This is the birth place of Saivite Saint Thirugnana Sambandar. Goddess Parvathi is said to have fed milk to Divine Child Prodigy Thirugnana Sambandar. This event is observed annually in the Popular Sattainathar Temple located here. Lord is also called as Brahmapureswarar and Thoniyappar too.

The Popular Darbharanyeswarar Temple [ Dharbai=a type of Grass and Aranyam (forest) hence it is called by this name. ] is located here. Lord Saneeswaran [Saturn] is enshrined here in a separate Sannidhi. Emerald Lingam in this temple is the special attraction and devotees attend the regular Puja to this lingam in the mornings everyday. This is a Navagraha Parihara Thalam, for Saturn visited by thousands of people during Saturdays and also on Saturn’s Transition [periodical] day to other zodiac signs.

It was also called as Aroor and assumed the present name later. It is 65kms from Poompuhar and 20 kms from Nagapattinam. Thyagaraja Swamy [Veedi Vidangar] Temple is the popular temple and more famous is the 96 ft tall AZHI THER [CHARIOT] weighing 300 tons and the Grand Car Festival of Thiruvarur. Lakhs of people turn out for this famous car festival. Lord is also worshipped as Moolanathar.

It is 25 kms from Poompuhar and popularly called as Tharangambadi [It means ‘Village of Dancing Waves’ ], located near the mouth of Cauvery River flowing through this land. This land was a Danish colony between 1620 to 1845. Christian Missionaries concentrated in spreading Christianity in this region. Danish Fort and buildings of Danish architecture are the main attraction of Tharangambadi. After 225 years of rule, The Danes, sold this land to British east India Company in the year 1845. The Danish Structures were converted into Educational Institutions by the Christian Missionaries.

This fort of Dansborg was built in 1620. The fort was surrounded by a moat, access to the fort being over a drawbridge. Along the Rampart; Governor’s complex, Church, Residential quarters, Barracks, Ware houses, Kitchen and Jail complexes were built to form a town within. Eastern side had the main part of the Fort facing the Sea. Sea on the on the Eastern and Western side protected the fort. Many parts of the fort have been constructed and re-constructed several times during their period. The Remains of the fort is under the control of Tamil Nadu Archaeological Department contains a MUSEUM, open to Public on all days except Friday.

Zion Church : or Church of South India , One of the oldest Protestant Church, was built in the year 1701 and was renovated between 1782 - 84, during the Danish period.

This is a structure in Danish Architectural style built in the year 1792.

This temple built in 1305 by Maravarma Kulasekara Pandian exhibits outstanding architectural skills. The front portion of the temple has been partly damaged due to sea-erosion.

This building gets its name as it was used as the residence of the Danish Governor in 1784. It is the biggest building in Tharangambadi.