Kumbakonam is one of the ancient temple town picturesquely located amidst the two rivers Cauvery and Arasalar. In olden days it was called Thirukudamookku and it is also popularly called as Kudanthai now. It is popular for the Divine Tank in the heart of the city where Mahamagam Festival takes when lakhs of pilgrims from all over Tamil Nadu converge here to take dip in the tank at the auspicious hour. All the deities of the temples in and around turnout here to have dip at that time too. This festival falls in the month of Masi [Feb-Mar] on Magam Star Day. The town reached the peak of its property during the British Period and it was a prominent centre of European education and Hindu culture and it assumed the name as the ‘Cambridge of South India’. 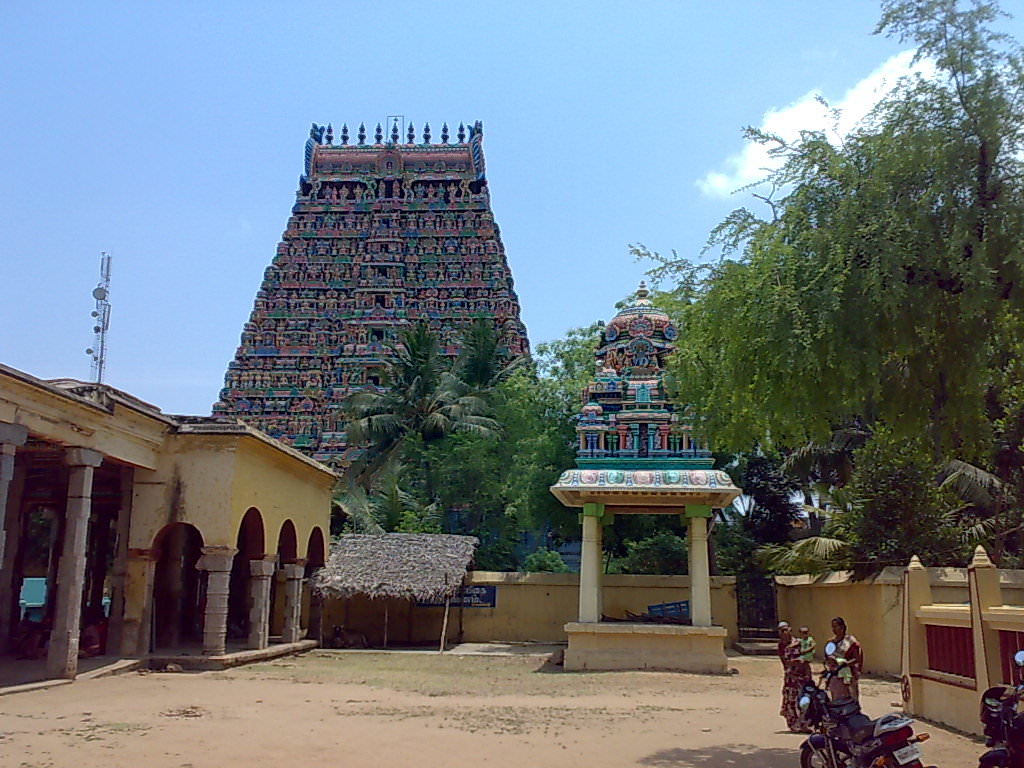 It is one among the important temples dedicated to Lord Siva. It is a padal petra sthalam ( glorified by saints and Nayanmars ). This temple complex is 2800 m2 in area and has Four Gateways or Towers on all four sides, the tallest being the 11 stage , 30 m tall tower on the eastern side. Apart from the presiding deities of Kumbeswarar and Mangalambigai Amman many shrines are located in this prominent temple complex. The sixteen-pillared hall built during the Vijayanagar Period has all the 27 stars and 12 zodiac signs carved in a single stone. Masi Magam festival is the important festival of the temple. 9th Century Chola Dynasty and the Thanjavur Nayaks made remarkable contribution to the development of temple. 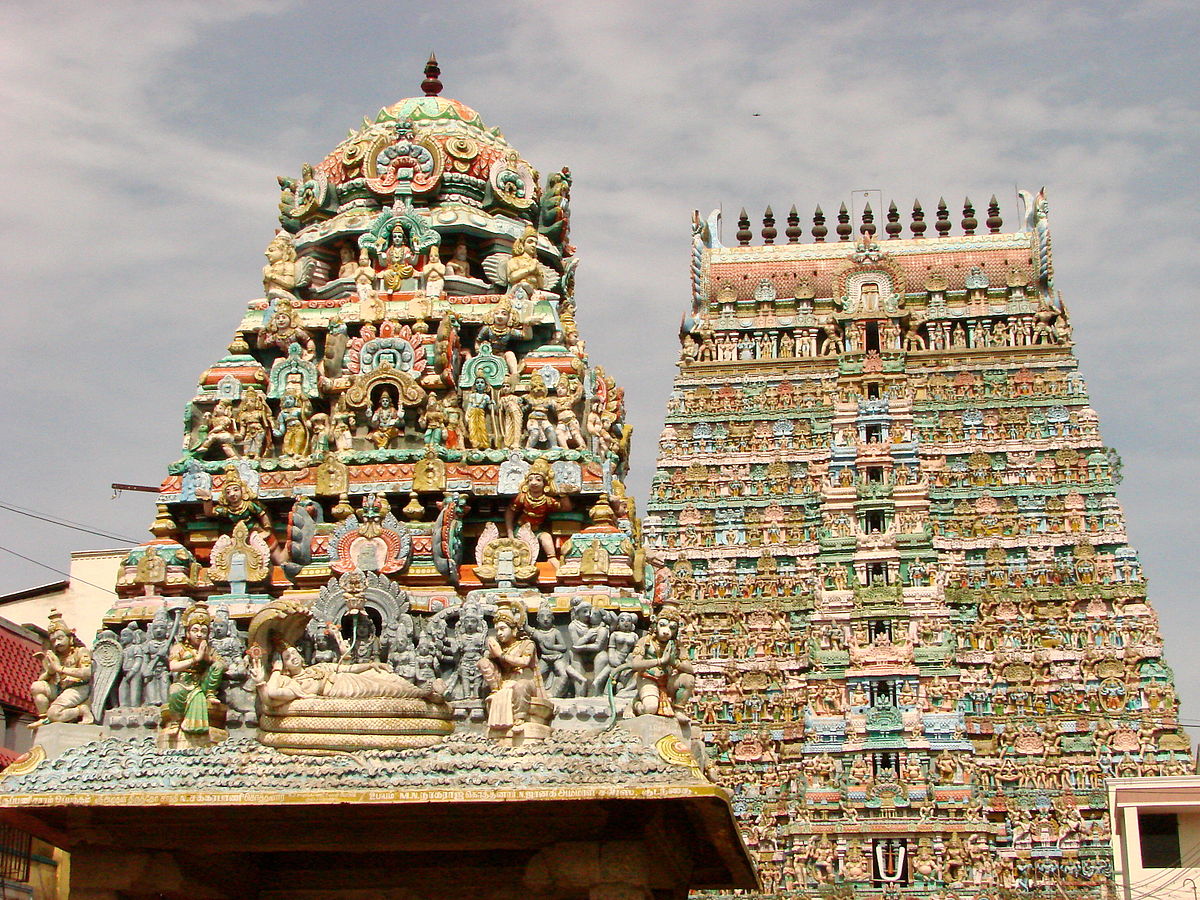 It is near the Uchipillaiyar Kovil junction at Kumbakonam. Lord is Sarangapani / Aravamuthan and Goddess is Nacciyar Komala Valli. It is one of the 108 Divya Desam glorified by the Alwars of Vaishnavite sect and also classified as one of the Pancharanga Kshetram on the banks of Cauvery. Medivial Cholas, Vijayanagar and Madurai Nayaks have developed this temple during their reign. Lord Sarangapani is in reclining position called as Udhana Sayana. 175 feet tall, 11 Tier Raja Gopuram or the tower is the highlight of the temple. The temple tank called as POTRAMARAI KULAM is located on the western side. Sanctum Sanctorum is made up with 12 columns, shaped like a chariot. Sarangapani believed to have appeared and blessed Saint Hemarishi here. Chariot Festival is the most colourful festival of the temple in the month of Chithirai [Apr-May]. The chariot is said to be weighing 300 tons. 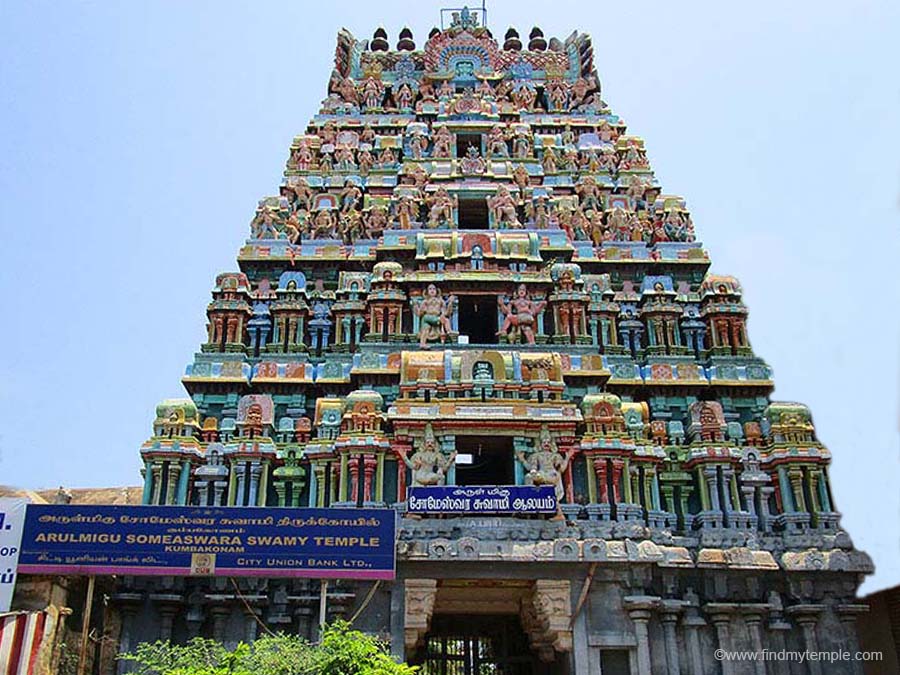 This temple is located on the south of Sarangapani Temple. It faces the North and there is abig tower or Gupuram on the eastern side. The architectural style and element of this temple resembles the Dravidian Architecture of the 13th Century of the Chola Regime. Aravamuthar and Thenar Mozhi thayar are the other deities enshrined in this temple complex. 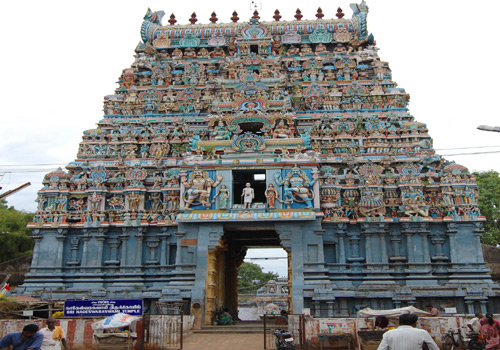 This temple was built by Aditya Chola during the 9th Century. This temple has Pralayakala Rudra Sannidhi. Adisesha and Surya had worshipped Sri Nageswara here. It is also a Rahu Parihara Sthalam. A legend has it that the mythological serpents Adiseshan, Dakshan and Kaarkotakan worshiped Lord Siva here. The orientation is structured in such a way that it allows sunlight inside the temple, right on the sanctum sanctorum only during the Tamil month of Chithirai (April/May). It is also called Surya Kottam or Keezha Kottam. It is said that Sanctum Sanctorum of both Nageswaran temple and the Sarangapani Temple are similar in the form of a chariot. The temple consists of three gopurams on the Eastern, Western and Southern sides. There is a local belief that, visiting Nageswaran Temple, Tirunageswaram and Thirupampuram in the Morning, Afternoon and Evening has significant meaning for Rahu Dosha Pariharam. First three days of Tamil Month Chithirai [Apr-May] the sun rays falls directly on the base of Sanctum Sanctorum. 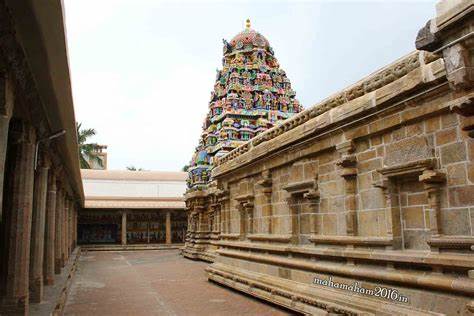 This temple was built in the 16th Century by King Achutha Nayak of Thanjavur. It is located on the South East of Potramarai Kulam and South of Uchipillaiyar Koil. The temple has a 3-tiered Gopuram. Shrine of Sri Rama with Vyakara Mudra seated with Sita has been installed in the Sanctum Sanctorum. Lakshmana, Bharatha and Chatruguna is in standing posture next to Rama and Hanuman kneeling down holding the Manuscripts. The Outer Court has pillars sculpted with finesse, various sequences of Ramayana and each pillar is carved out of a single rock. Paintings of Pattabishekam[coronation] of Vibishnan and Sugriva; Hanuman playing the Veena, Agalya getting relieved of the curse too are found in the temple. The temple is a typical Nayak style of temples. One can read the Chitra Ramayana On the walls of the Sanctum Sanctorum while going around the Sanctum Sanctorum.

The Temple is the solitary temple complex for Sri Chakrapani . Chakrapani other wise called as Sakarathazhvar, is on the north of the Periya Kadai Veethi [Big Bazaar Street] on the southern Bank of River Cauvery. It is believed Lord Vishnu appeared in the form of Sudharsana Chakra to put down the arrogance of Suryan. It is said the Chakrapani has the third eye like Lord Siva. The Second biggest vaishnavite temple of Kumbakonam. Agampara Vinayakar, Panchamuka Anchaneyar and Thayar Vijayavalli are enshrined here in this complex. Utharayanam [Thai – Aani] and Dakshinayanam [Aadi – Panguni] have two different entrances to worship Sarangapani in the Sanctum Santorum. They are called as Dakshinayana Vayil [gate] and Utharayana Vayil (gate). The outer court adjoining the Sanctum Sanctorum has been designed like a balcony. 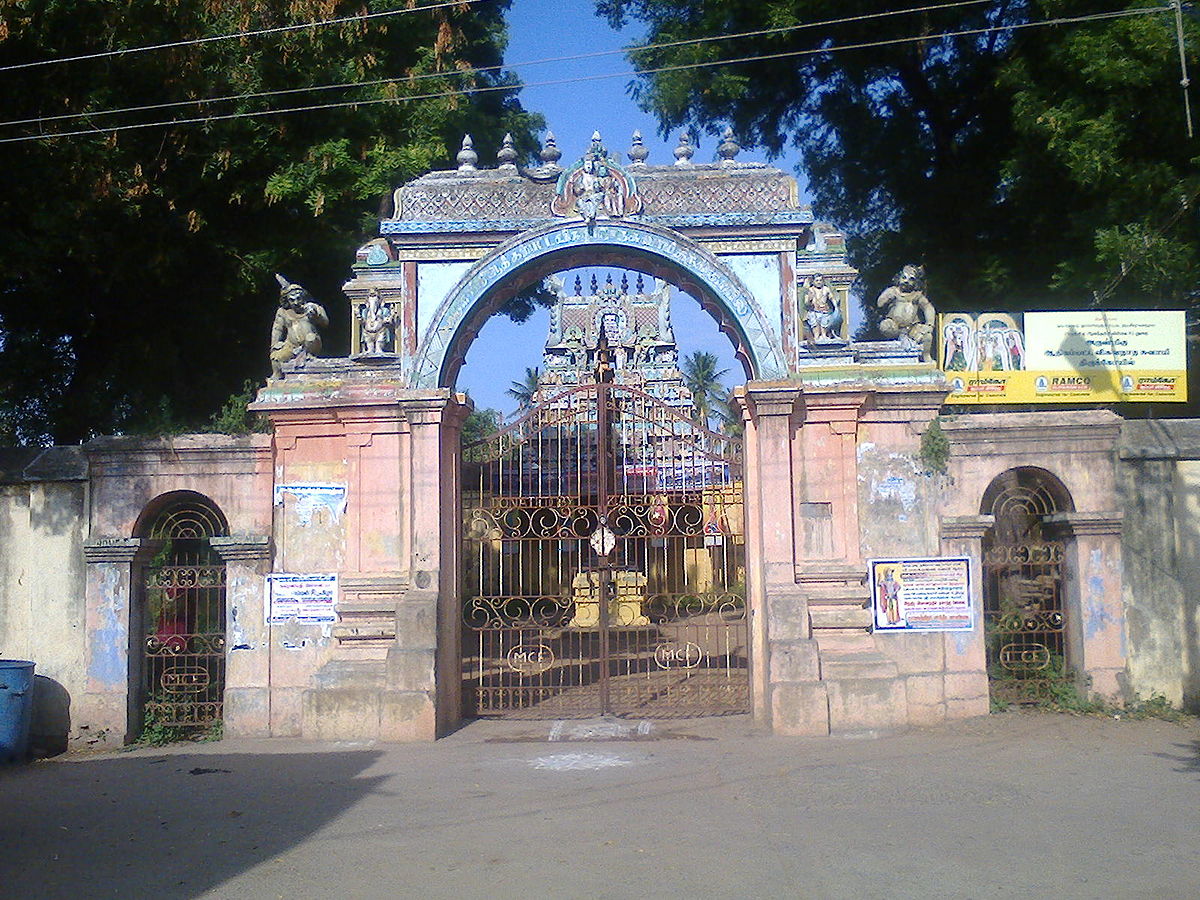 This is relatively a smaller temple complex located amidst the Panapuri Agraharam in the heart of the town. Veda Vyasar is believed to have visited this temple and worshipped the Lord Here.