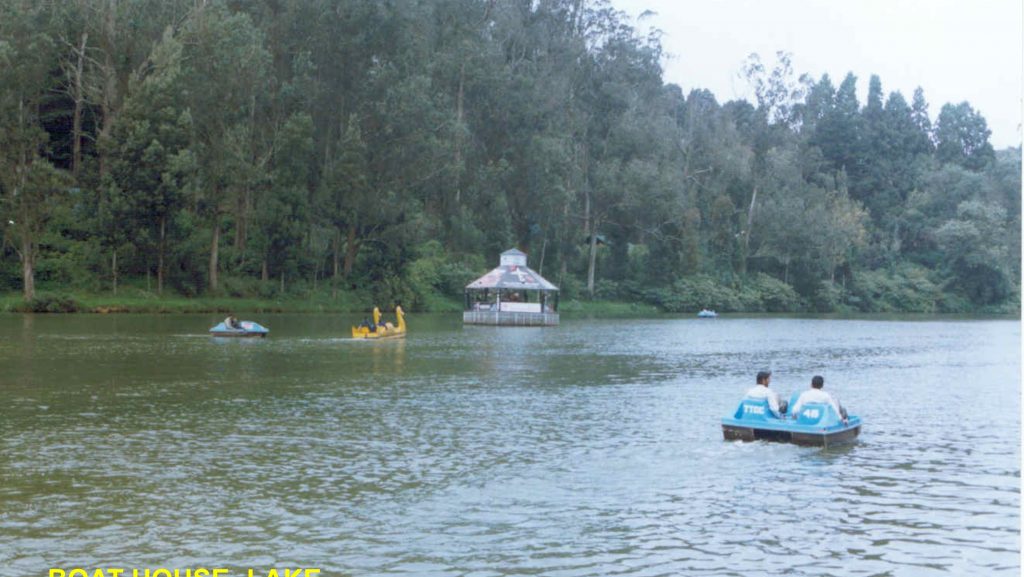 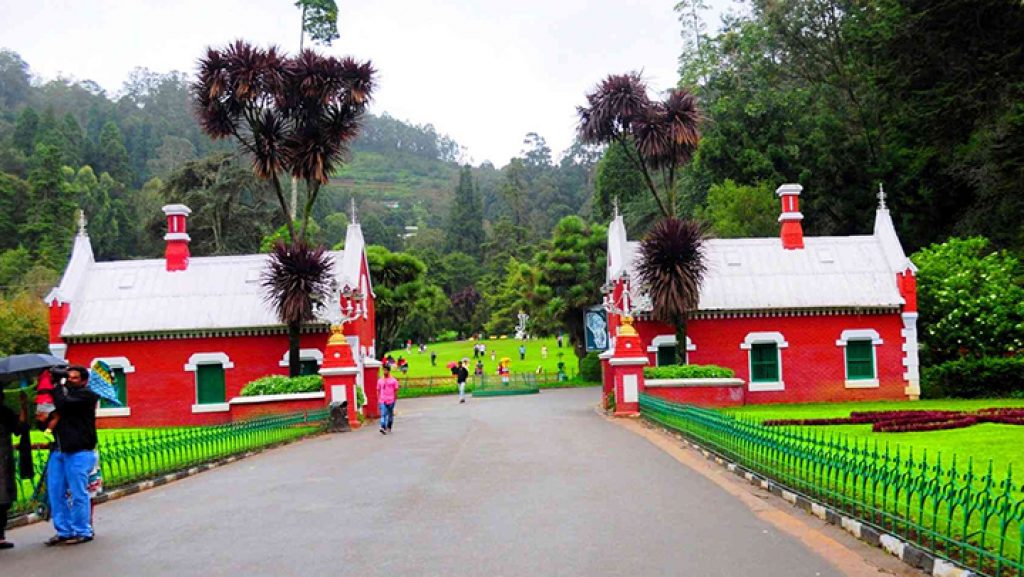 The district of Nilgiris is a very famous tourist destination in the state of Tamil Nadu in India and people from different parts of the country and also from outside the country visits this district throughout the year. Udhagamandalam, the headquarters of the Nilgiris district, is the largest and most important hill station in south India. This principle station on the Nilgiris is at an elevation of two thousand two hundred and eighty six meters and located at the centre of the district. It is an extensive valley enclosed on all sides but the west by a lofty range of hills. The name `Ooty` or `Ootacamand` was first mentioned in about 1821 in the Madras Gazette which was then spelt as `Wotokymund` by an anonymous correspondent. Ooty is also fondly called the Queen of Hill Stations. The major attractions of Ooty are Government Botanical Garden, Centenary Rose Park, Ooty Lake, Doddabetta Peak, The Ootacamand Club, Raj Bhavan, Adam`s Fountain, Honey and Bee Museum, The Ooty Radio Telescope, Kamaraj Sagar Dam, Glenmorgan, Avalanche, Pykara Lake, etc.

How to reach The Nilgiris

By Road: Ooty is connected by road to several cities. It is 535 km to Chennai via Mettupalayam Salem, 89 km from Coimbatore, Calicut is 187 km via Gudaur, Mysore is 160 km via Gudalur, Bangalore is 290 km, Cochin is 281 km via Coimbatore Palakkad, Trichy is 302 km and Kodaikanal is 265 km via Coimbatore Palani. By Rail: Ooty is connected to Mettupalayam by narrow guage Toy Train. One of the most picturesque train rides of India, the train goes through several tunnels, over waterfalls, edge of cliffs, tea estates, etc. While coming up, the nostalgic steam engine pushes the coaches from behind and while going down, the engine goes in reverse, pulling the coaches. A ride on this scenic train route is a must. By Air: nearest International Airport is Coimbatore(105km) which is well connected with all major cities.

The Ooty Lake is the pride of the Blue Hills. It is the central and strategic attraction. Mr. John Sullivan formed this artificial lake in the year 1824, the then Collector of Coimbatore. The Ooty lake which extends to an area of 65 acres. Earlier the entire lake was used for fishing. The Tamil Nadu Tourism Development Corporation on behalf of the Tourism Department took the possession of the lake for pleasure boating facilities in the year 1973. Another added attraction of the Ooty lake is the Mini Train and an amusement park.

This garden was laid out in 1897 by the Marquis of Tweedale and is spread over 55 acres. Lush green, well maintained lawns, rare trees species (like the cork tree which is probably the only such tree in India, the paper bark tree and the monkey puzzle tree-monkeys cannot climb this tree), a 20 million year old fossilized tree, an Italian-style garden bordering a clear pool, a vast variety of flowering bushes and plants in myriad hues (exotic and ornamental), fern house with a vast range of ferns and orchids, are some of the many highlights of this garden. A flower show along with an exhibition of rare plant species is held every year in month of May at this garden. Best time of the year to visit: April, May & Sept.

Situated in the heart of Ooty town, this garden has been beautifully laid out in terraces with rose tunnels, pergolas and bowers with rose creepers. To commemorate the centenary Flower Show, the Rose Park was established at Vijayanagaram in Udhagamandalam covering an area of 4 hectares in five terraces. Today this garden has the largest collections of roses in the country like Hybrid Tea Roses, miniature rose, Floribunda, Ramblers, roses of unusual colours like black and green are some of the more than 3,000 varieties of roses that will captivate your senses. The Rose Garden is situated in slopes of the Elk Hill. The rose varieties planted in this park were assembled from different sources. The ‘Nila Maadam’ is located in a spot from where viewers can see the entire rose garden. This garden is maintained by Tamil Nadu Horticulture Department. It has also received the award of Excellence for the best rose garden in entire south Asia from the International Rose society in 2006.

At 2,623 mts above MSL, Doddabetta is the highest Peak in the Tamil Nadu and is about 10 kms. from Ooty bus stand. The name Doddabetta literally means ‘Big mountain’ in the Badugu Language, which is so in reality. It is at the junction of Western and Eastern Ghats and offer beautiful vistas of Nilgiri Hills range. It is surrounded by dense Sholas. One can have a magnificent panoramic view of landscape and the whole of the District and even beyond through the Telescope House run by T.T.D.C., which is an added attraction . The Sunset is spectacular from this view point.

Government House (Raj Bhavan) is situated on a ridge of the Western Slopes of Doddabetta on the outskirts of the South Eastern Quarter of Udhagamandalam. Before Udhagamandalam became the virtual summer capital of the state, it was visited periodically, by the Governors of Madras for a few months to -make a good escape from the hot sultry weather of Madras.

Built in 1877 by the Duke of Buckingham when he was the Governor of Madras, Government House, Raj Bhavan today, is used only occasionally during the Governor of Tamil Nadu’s visit to ooty. Otherwise, the sprawling cream-coloured mansion, overlooking the Botanical Gardens stands a silent reminder of the pomp and grandeur that it had seen in the days of the Raj. A fine ballroom added by Sir Arthur Havelock in 1900 and in 1904 the entire building was electrified. The well-kept lawn and the beautiful gardens is the residence of the Governor for most of the summer months of April, May and June. Portraits of Governor and their ladies, of Queen Victoria, George V, George Marry, the Duke of Buckingham and Chandos and many others decorate the walls of the house.

It is about 12 kms. from Coonoor bus stand situated near Tiger Hills. It is unique rock of tremendous proportions, jutting out of the face of hill side in the formation which its name suggests. The view here is extremely grand and well repays the exertion of getting there. Left and right are great ravines; on the one side is seen an excellent view of the magnificent St. Catherine’s Falls with their stream continuing several thousand metres below, while on the other, the familiar Coonoor stream meets the stream from Kotagiri. They together tribute to the great Bhavani river. In fact, we are metres away from the Nose opposite to it and separated in between by the deep valley that is covered with the beautiful greenary and mash of tree tops.

Lamb’s rock is perhaps the most favorite place for picnic parties near Coonoor. It is a point on the way to Dolphin’s Nose, and the Seat was so called by the then Collector Mr.E.B.Thomas, after one Captain Lamb who made earnest attempts to open a path to the place. It is situated in Burliar village and is about 8 kilometre from Coonoor. The rock is a sheer precipice of jagged rock drops down several hundred feet to bury itself in the luxurient jungle below.

There are a few views which are beyond compare. On the right hand yawns to great Hulical ravine and from its base some 5000 feet below, ascends the roar of the Coonoor stream. The Lamb’s Rock is a sheer precipice of several hundred meters and commands a good view of the Coimbatore plains.

At 35 km North west of Ooty is situated Glenmorgan, which was then very famous for the Tea estate. The beautiful lake at the foot of this estate constitutes the fore bay for the Pykara power house which is above 4 km down the hill at Singara.

Glenmorgan and Singara are of great importance to the tourist as delightful picnic spots. The view from the point above the rest house at Glenmorgan is panoramic. A picturesque view of the Pykara power house at Singara, the Moyar valley, The Mudumalai Wild life Sanctuary and the distant places of Mysore can be had from here.

Travel 28 kms from Ooty town past the Emerald Lake surrounded by undisturbed forest and you have reached Avalanche. It is on the way to Upper-Bhavani from Ooty via Emerald Camp. The gorgeous scenery at every turn is an experience of wonder and delight. The views from the top of the hill at Avalanche give a magnificent sight of the Avalanche Valley and reservoir In many places here, the shoals are so thick that even sunlight cannot penetrate. Avalanche is home to a wide variety of birds in great abundance. Spotting and identifying them can be a very rewarding experience for bird lovers.

The Pykara is the largest river in the District. It is considered very sacred by the Todas. The Pykara river rises at Mukurthi peak. It passes through hilly tract, generally keeping to North and turns to West after reaching the Plateau’s edge. It gets down majestically in a series of cascades; and the last two falls of 55 meters and 61 meters are known as Pykara falls. They are about 20 kms from Ooty.

The Pykara Lake is about 21 kms from Ooty on the Ooty-Mysore road. Boating on the Pykara lake is enjoyable. A restaurant is also available. Wenlock Downs, a vast Expanse of grassy meadow on way to Pykara, is a favorite picnic location and is very popular with the movie makers of this country.