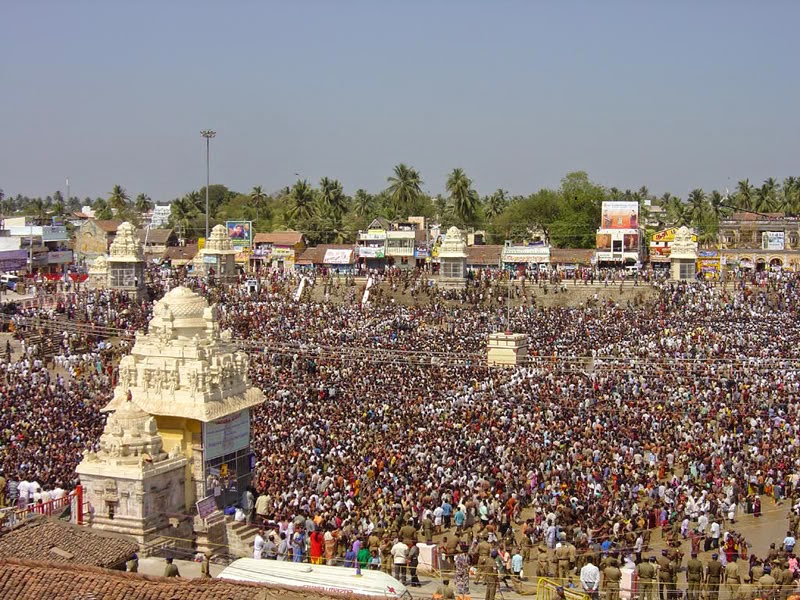 The Masimaham or Mahamaham is an annual event that occurs in the Tamil month of Masi (February-March) in the star of Magam in Kumbakanom, which is an ancient, beautiful and holy place. This once in a 12 year gala event held from February 13-22nd of 2016. Vast crowds of more than forty six lakh pilgrims gathered at Kumbakonam had a dip in the tank, along with saints and philosophers.

The festival is celebrated at an interval of around eleven to twelve years. The festival takes place at a particular time as determined by astrological position: during the full moon of the Tamil month of Maasi (February-March) when the conjunction of the moon with the lunar asterism (Magha Nakshatra) and when Jupiter is in the constellation of Leo. This Festival occurs when the sun is in the Zodiacal sign of Aquarius(Khumbha), Jupiter transits Leo(Simha) and the Moon is in conjunction with the constellation Maham. Generally all the these astronomical combination take place on a full moon day of the Tamil Month of Masi(Solar Kumbha Month) i.e. either in the latter half of February or in the first of March

So its written in Bhavishya Purana

How to reach Kumbakonam

By Road: This city is well connected to major cities and states. The major cities near Kumbakonam include Tiruchchirappalli at 78.6 km, Pondicherry at 116.1 km, Madurai at 179.9 km, Chennai at 255 km and Bangalore at 298.2 km. By Rail: Kumbakonam is connected by rail with almost all important cities and towns of south India. Regular express trains from places like Chennai, Coimbatore, Madurai and Tiruchirapalli ply to and from Kumbakonam. Passenger trains from nearby places like Thanjavur are also available. By Air: Tiruchirapalli Airport, situated around 91 km away is the nearest airport to Kumbakonam. Several domestic airlines connect Tiruchirapalli with other Indian cities on a daily basis. Travellers can board a flight till Tiruchirapalli and then hire a local vehicle to reach Kumbakonam.