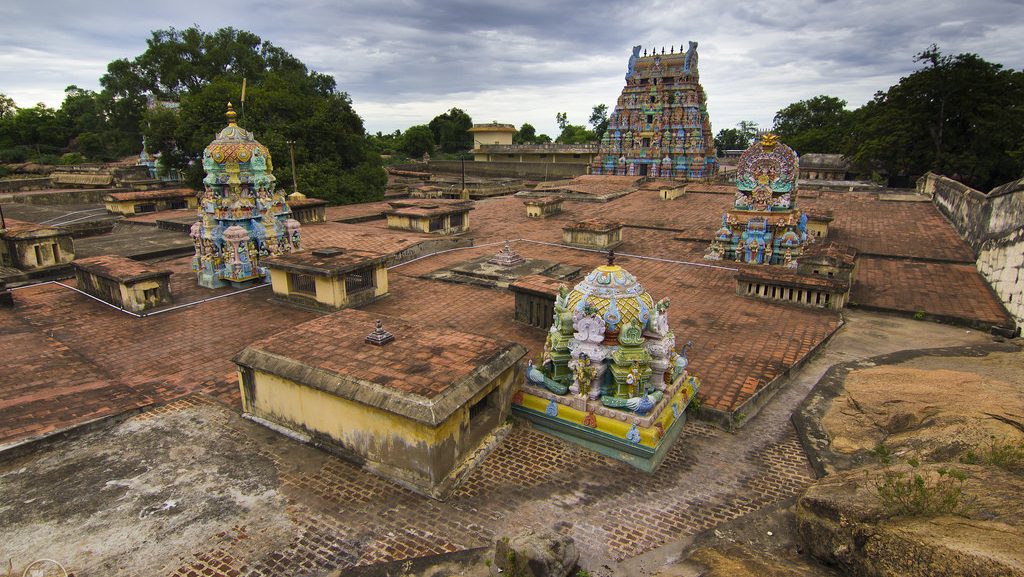 Pudukkottai district`s history states its origin from the Tiruchirapalli District and Thanjavur District, when Pudukkottai was carved out from these two districts on the fourteenth of January 1974. Presently, the district of Pudukkottai is composed of two revenue divisions, called the Pudukkottai and Aranthangi and nine taluks, called the Kulathur, Illuppur, Gandarvakottai, Alangudi, Thirumayam, Aranthangi, Pudukkottai, Avudaiyrakoil and Manamelkudi. There are seven hundred and sixty five Revenue villages in this district. The total area of this district is four thousand six hundred and sixty three square kilometres. A majority of the villages of this district are of ancient foundation. Pudukkottai district was one of the homes of pre-historic man and the presence of a large number of burial sites found in the northern and western parts of the district attest this fact. The history of this district also deals with the rule of the Pandya Dynasty, the Chola Dynasty, etc over it. 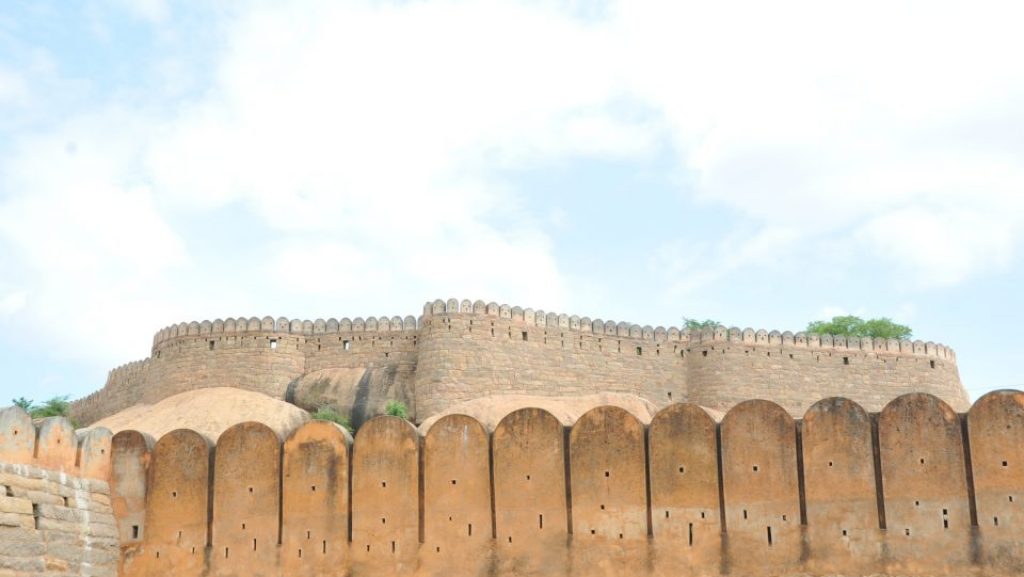 The temples of Pudukkottai district are of great importance which attracts a large number of pilgrims through out the year. There are also various other places of religious importance for the Muslims, Jains, etc. Avudaiyarkoil is the most ornate temple in the district which is full of bursting barogue sculptures. It is the temple of Athmanatha. It is called Thirupperundurai in inscriptions and intimately associated with Siva saint Manickavasakar. The Rock-cut cave temple of Sri Gokarneswara-Brahadambal at Thirugokarnam is a Pandya art and belongs to ninth century A.D. It is the tutelary deity of Thondaiman rulers of Pudukkottai. The Pudukkottai Museum is located at Thirugokarnam having rare collections in Geology, Paintings, Zoology, Anthropology, Archaeology, Economics, Numismatics, Botany and Philately. The Fine Sculptures and bronzes of various periods are the attractive items of the Museum. Another famous temple in this district is the temple of Lord Subramanya at Viralimalai on a hillock. It is also a peacock sanctuary, and is thirty kilometres from Trichy and forty kilometers from Pudukkottai. Kudumianmalai is situated twenty kilometres away from Pudukkottai. The presiding deity of the temple is Sikhagiriswarar. There are beautiful sculptures in the temple and the temple is noted for numerous inscriptions. Remarkable among them is the one relating to a musical treatise. There is a rock-cut cave temple with massive bas-relief dwarapalakas and with the architectural features of Hoysala style belonging to the 8th-9th century A.D. The Anna Agricultural Farm and Agriculture Research Institute are the other attractions of this place. 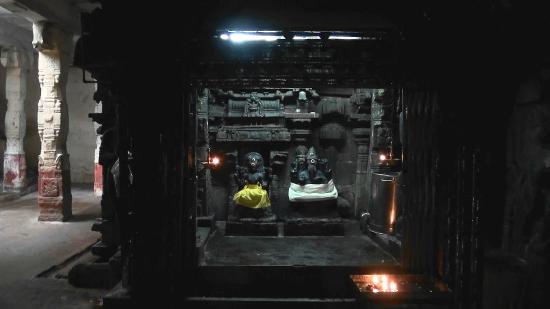 Pudukkottai District comprises marvelous Archaeological sites and rich Cultural Heritage. The History of Pudukkottai is an epitome of the History of South India. Different Dynasities such as Pandyas, Cholas,pallavas, Nayaks, Irukku veliyar,Mutharayar, Thondaman , Vijayanagar Emporors and Hoysalas ruled over this District on different occasions. The prosperity of the District that had existed on the periods of Monarchy continued and maintain the same pride still now .

How to reach Pudukottai

A rock cut cave temple situated in the heart of the city built by Mahendravarma pallava is Known as Kokaraneeswarer temple. Lord Siva (Kokaraneeswarer) and Lord sakthi (Pragadambal ) are the main deity of this temple . The later additions were made by Pandyas, Cholas and Thondaman Dynasty and become a great structure of temple. Many festivals and dance programmes were frequently performed here on ancient days. Drama ,dance and music flourished to its peak during the Thondaman dynasty. Chithirai festival, Adi pooram and Navarathiri Vizha are the important festival celebrated here. Telephone : 04322 -236195

A museum has been initiated by the state Government on 1910 AD with the antiquity of History, Geology, Zoology, Archaeology,Anthorapalogy and sculptures. The rare materials like war fares, copper materials, sword, coins, musical instruments and paintings are exhibited here for vision. The materials expose the life and times of ancient people and their culture.

Working days On all days between 9.00 am to 5.00pm except Friday and National Holidays

Olden days kings construct Fort and palaces, so as to protect the subjects from enemy country and a residential area for the royal family. Similar type of Fort is existed in Thirumayam at a distance of 18km from pudukkotai. It was built by sethupathy Vijaya Ragunatha Thevar of Ramanathapuram in 1687 A.D. The actual fort is two times greater than the fort as we have seen today. The main entrance of the fort is situated one km away from the present structure. A rock cut siva temple and a vishu temples with different statues, Darbar Hall, some inscriptions and pillared corridor were situated at the foot of the hillock adjacent of the Fort. It is under the control of the Archaeological survey of India .Many Tourist visited this spot for its Historical importance of this place. CONTACT PHONE 04322- 221084 Visiting Hours: Morning 6.00 am to 12.00 pm Evening 4.00 pd to 6.00 pm

It is located at a distance of 20 km from pudukkottai . The cave temples situated here are the testimony for the ancient art and culture. There is siva temple on a hill lock dedicated to Sikkanatheeswarer and life size sculpture were surrounded by this temple. There are more than 100 inscriptions with a highlight of an inscription expressing the gramatical notes of Karnatic music. There is famous Agricultural college owned and maintained by Government of Tamilnadu. Pone No. 04322 – 221084.

The temple dedicated Athmanatha samy situated in Avudayar koil at a distance of 60 km from pudukkottai, contain life-size sculptures. The roof of the Avudaiyar Koil made up of copper plate similar to that of the Nataraja temple at Chidambaram having golden plates.The temple is noted for its granite roof work.Tha saint Manickavasaga had been given high focus in this temple. It has been under the control of Thiruvadu thurai Atheeyenam. Phone No 04371- 233301.

Chithannavasal is a Prominent Tourist Centre of Pudukottai District. It is located on the Annavasal – Pudukottai Road at a distance of 17 km from Pudukottai. In ancient days the Jain Monks used to live in cave and hillocks so as to perform their ascetic life. They polished the hill for the purpose of poojas and penance in the open shelter. Such a type of Jain temple and Jain beds are found in Sittannavasal and surrounding places. On the Eastern side of the sittannavasal hill have more than 17 beds . The rare Brahmi Tamil script inscriptions are found near the beds. The Jain Beds are collectively Know as Ezhadi pattam.

A second century Jain temple in chithannavasal consisted of Mahavir statue on both sides of wall is considered as a ‘Meditation Hall’ or Arivar temple . The ceiling of the Arivar temple are full of Fresco herbal painting dates back to Mahendravarma pallava. Paintings of a royal couple and a lotus tank with marine creatures are notable fresco paintings. These paintings are considered to be the next of Ajantha cave Paintings at Aurangabad. The cave temples are under the control of Archaeological survey of India. The Excavations of Archaeological survey of India reveals that the surroundings of the Chithannavasal have unearthern burial pots. This pots are know as Muthumakkal Thazhi. After death the Jain monks are kept in the pot and buried in the Burial Ground. The District administration together with the financial Assistance of Tourism Department incorporated the Miniature statue park, Children park , dancing fountain and boating jetty near the jain cave Temple. Many foreign and Domestic tourist used to visit this place throughout the year. It ranks first in the tourist arrival statistics of this District.

It is located at a distance of 17 km from Pudukkottai. Narthamalai is head Quarters for the Cheiftain of Mutharaiyar. The earliest structural stone temple circular in shape,vijayalaya choleeswaram cave temple and kadambar malai temple are the main attractions of Narthamalai. Now-a-days the Narthmalai muthu Mariamman temple also attract many tourists to this place. The mullaipari procession is an attracting event of this temple.

Pdukkottai District ,at Keezhayur panchayat a siva temple together with vishu temple have been situated with a distance of 33 km from Pudukkottai and 15km from Keeranur is known as malaiadipatti. During 730 AD Nanthivarma Pallava carved the siva temple (Vakeewarer) from the Hill locks. The Vishnu temple is constructed later than the Siva temple and Narashima Moorthy, Thirumal, Ananada sayana moorthy and Ahishasan statue are the attractive statues situated in this Vishnu temple.Some of the paintings depicting the ten avadars of Thirumal have been beautifully painted on the walls of Thirumal cave Temple . The mudumakkal Thazhi also available in some areas of this village in a burial ground.

The name Kunnandar Koil is called as Thirukundrakudi in the inscriptions available in this Temple. It is located 40 km away form Pudukkottai and 22km away from Keeranur. A siva temple (cave temple ) has been constructed during the period of Nandhivarma pallava (775 AD) is existed in this village. Lord Muruga Temple is also available on the top of a small hill . There is mandapa ia the shape of a chariot with horses attaract many tourists in this spot.

The name Kodumbaloor has been mentioned in the Tamil epic Silapathigaram. It is located at a distance of 35km from Trichy and 40km from pudukkottai. The architectural structure existed here are the forerunner for Dravidiyan style of architecture. The remaining structures of Muvar koil and Mujukundeeswarer temple attracts many tourist to this place. It is under the control of Archaeological survey India.