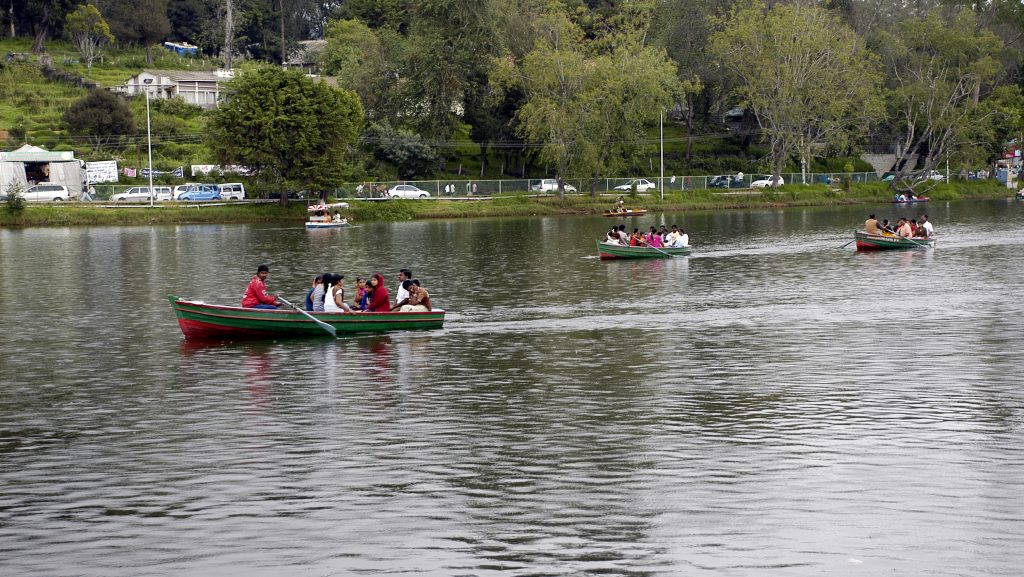 There are several places of interest in Dindigul District. Palani hills with the famous temple of Lord Muruga Dhandayuthapani Temple, Begampur Mosque, Sirumalai Hill resort, Parapalar Dam, Varathamanathi dam, Mariamman temple and Nadupatti Anjaneyar temple are places of tourist interest in the district. The famous Kodaikanal Hill Station is also located in Dindigul District. An attraction of this hill station is the Kurinji flowers that bloom once in twelve years. The reserved forest area of the district consists of 84, 565 hectares, which is rich in flora and fauna like Seehakai, Nellikai, Bluegum and Pine and Gaur, Nilgiri langur, panther, barking deer respectively. Peranai and Sirumalai are the two fine picnic spots of this district. There are nine dams namely Palar Porundalar, Varathamanathi, Kuthiraiaru in Palani Block, Parappalar and Nanganchiar in Oddanchatram Block, Maruthanathi, Kamarajar Sagar in Athoor Block, Mavoor in Nilakottai Block, Kudaganar in Vedasandur Block supplement irrigation facilities to agricultural fields in this district. Nilakkottai town is famous for Brass Vessels and Jewellery. Nilakottai Taluk is famous for the growing and marketing of flowers and Grapes.

How to reach Dindigul

By Road: The national highway number 7 connects Madurai to Dindigul. NH 45A, which connects Kanyakumari to Chennai, passes through Dindigul. Also, NH 209 connects Bangalore to Dindigul. State highways like the Bathalgundu Road and Natham Road pass through Dindigul. The state transport corporations of Karnataka, Kerala, and Tamil Nadu provide services in Dindigul. So do a lot of other private players. By Rail: The Dindigul Railway station provides excellent connectivity both to Madurai and Chennai and all trains going southwards from Chennai to Madurai pass through Dindigul. It also falls on the route between Karur and Madurai that provides passenger trains for Palani. By Air: Nearest Airport: The Madurai Airport is 70 km from Dindigul.

Kodaikanal is one of the very popular holiday destination hill resorts in South India. This hill station stands 7200 feet above sea level and situated in upper palani hills of the westernghats near Madurai in Tamil Nadu. Kodaikanal is also popularly known as the princes of Hill Stations. The cool and misty weather, the scenic beauty of the rolling hills and the wooded forest of Kodaikanal and its surroundings will mesmerize any visitor throughout the year. Walk through the wooded forests, row in the lake, bath in one of the splashing waterfalls, go for horse riding and cycling around the lake or simply admire the views.

Palani Arulmigu Shri Dhandayuthapani temple is one of the Six Abodes of Murugan. It is located in the town of Palani in Dindigul district, 100 kilometres (62 mi) southeast of Coimbatore and northwest of Madurai in the foot-hills of the Palani hills, Tamil Nadu, India.

Thadikombu Perumal Temple is located on the Dindigul- Karur route about 18 kms away from Dindigul. The main deity of the temple is Lord Alagar. The main festival of the temple is celebrated during the Tamil month of Chitrai, which falls in April and May. During this festival, the deity is offered regular prayer for 12 days.

Sirumalai is a region of 60,000 acres (200 kms) situated 25 km (16 miles) from Dindigul and 40 km (25 miles) from Madurai, Tamilnadu, India. There are many high hills in the area. Hillock International School is located in Sirumalai. Sirumalai is a dense forest region with a moderate climate throughout the year. With an altitude of 1600 metres above sea level, it contains diversified flora and fauna. The hill has 18 hairpin bends. Sirumalai Hills has several scenic natural attractions which are enjoyed by its visitors and make it a popular destination. They are described below:

Annai Velankanni Church The church is on a slope at the top of the hill. It is 2 kms from the nearest bus stop. Residents observe the festival for “Our Lady of Good Health” annually in September, with a flag hoisted prior to the festival. Sirumalai Lake Sirumalai Lake contains a small lake that was artificially created in the year 2010. This Lake is a man made one. This lake here bordered by tall green trees. Boating facility is available too for those who want to slowly glide through the placid waters of the lake. Boating is available in the lake mostly during the weekends when there is enough water in it. Observation Tower An Observation tower located on seventeenth Hair Pin Bend offers a (much needed) place for a stopover. At this point, there is nothing better you can do other than enjoying the jaw dropping scenery below. Sanjeevani Hills The hill became famous when Lord Hanuman had to search for a certain herb, and not finding it, had to take the entire hill with him to cure Lord Laxmanan. On his way back from Sri Lanka with the hill, a piece fell down here and it came to be known as Sanjeevani Hills. This Hill is part of Sirumalai Hills. Saathiyar Basin Saathiyar River originates from Sirumalai hills and flows southward and empties into Vaigai River. The basin covers an area of 819 square kilometres (316 sq mi). The total ayacut of the sub-basin is 4,279.89 hectares (10,575.8 acres). Near Vadipatti, Saathiyar Dam has been constructed across this river for irrigation purpose. This is the catchment area of the Saathiyar Dam in Madurai. Vellimalai Murugan Temple The famous Lord Murugan temple (Vellimalai Murugan Temple) is located in the mountain which is away from 45 minutes climbing over the valley. This temple is renowned throughout the neighbouring villages and towns. Khandige Estate The Khandige estate spread across 1000 acres is located in the Sirumalai hills, an isolated group of hills in the Dindigul district of Tamil Nadu drained by three rivers of which 2 are perennial which flow through the Khandige estate before flowing into the plains as a series of waterfalls. The region receives an average of 120-132 cm rain during the months of October and December. Surrounded by about 20-30,000 Acres of reserve forest, this estate has a natural wealth of flora and fauna, particularly medicinal plants, which has been left primarily untouched. The primary aim of this estate is to conserve the bio-diversity of the Western Ghats and to prevent or at least stall the destruction of this rich eco-system due to rampant deforestation. Selvi Koil Point The place offers a panoramic view of Dindigul and Chinnamalai town. At dusk, the Selvi Koil Point unveils a view of the beautifully illuminated Dindigul and adjacent Chinnamalai town down below, which appear oval-shaped. Agastya Puram Agastya Puram is located in Sirumalai Hills named after the prominent Agastya Siddhar. In the region of Sirumalai the Agasthiarpuram is a holy place where siddhas (monks) have lived since ancient days. The area is surrounded with medicinal herbs and plants. In the tip of the hill there is historic Shiva Lingam, which dates back at least 500 years. Silver Hills Located in Agastya Puram is Silver Hill, this is the tallest hill in Sirumalai. It is said that the peak of the Silver hill was made up of Silver but to avoid man’s destructive actions during the Kali Yuga the hill was transformed via Alchemy in to stone by Agastya Siddhar, hence it got the name silver hill. The hills silver glitter can be still seen in the sun light. In the peak of this Silver hill is a 500-year-old Shiva Lingam, walk to top of the hill is about 30 – 45 minutes.