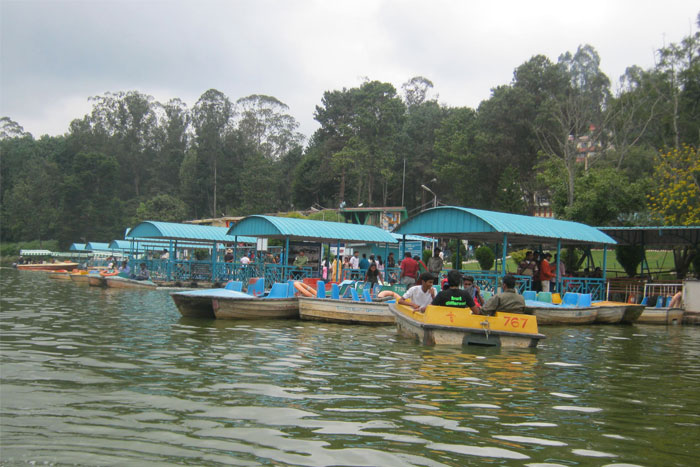 Ooty lake is an artificial lake constructed by John Sullivan, in 1824. The water flowing down mountain streams in the Ooty valley was dammed to form the lake. The lake became empty on three occasions when it breached its bund. The lake was originally intended to be used for fishing with ferries being used to travel across the lake. It gradually shrunk from its original size giving place to the current bus stand race course, and the lake park. The Tamil Nadu Tourism Development Corporation on behalf of the Tourism Department took the possession of the lake in 1973, for providing boating facilities as a tourist attraction. 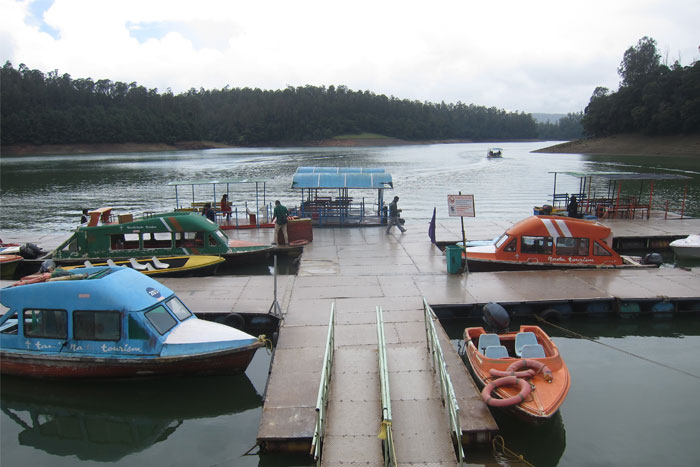 Pykara is the name of a village and river 19 kilometres (12 mi) from Ooty in the Indian State of Tamil Nadu.The Pykara River is considered very sacred by the Todas. It rises at Mukurthi peak, flows northwards, and then turns to the west after reaching the edge of the plateau. The river flows through Murkurti, Pykara and Glenmorgan dams, and forms part of an important hydro-electric power project. The river flows over a series of waterfalls, the last two of 55 metres (180 ft) and 61 metres (200 ft) being known as Pykara Falls.The falls are approximately 6 kilometres (4 mi) from the bridge on the main road. There is a forest rest house at Pykara. A boat house on the Pykara reservoir is an added attraction for tourists. Pykara boasts well-protected, fenced sholas, Toda settlements, large grassy meadows and good wildlife habitat. The Pykara Dam, falls and reservoir attract many tourists. 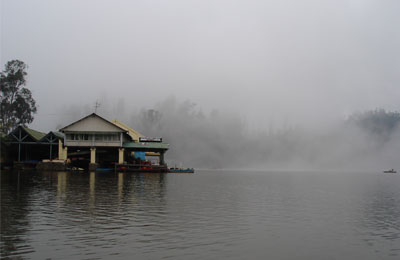 Kodaikanal Lake, also known as Kodai Lake is a manmade lake located in the Kodaikanal city in Dindigul district in Tamil Nadu, India. Sir Vere Henry Levinge,the then Collector of Madurai, was instrumental in creating the lake in 1863, amidst the Kodaikanal town which was developed by the British and early missionaries from USA.The lake is said to be Kodaikanal's most popular geographic landmark and tourist attraction.Boating in Kodaikanal Lake.Over the years a boat club, boathouse and boat service (with rowing boats and pedalling boats and a public ferry) for the public and tourists has become fully functional and is of aesthetic significance for tourism. Boat Pageant and Flower Shows are a regular feature in the summer season which attracts tourists. 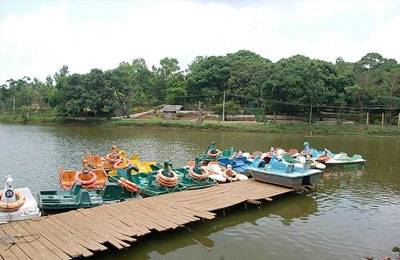 Yercaud is a Hill station in Salem District, in Tamil Nadu, India. It is located in the Shevaroys range of hills in the Eastern Ghats. It is situated at an altitude of 1515 metres (4970 ft) above sea level, and the highest point in Yercaud is the Servarayan temple, at 5,326 feet (1,623 m).The hill station is named owing to the abundance of forest near the lake, the name signifying Lake Forest.The total extent of Yercaud Taluk is 382.67 km2, including reserve forest. The entire county is administered as a township. Yercaud also has a village council. 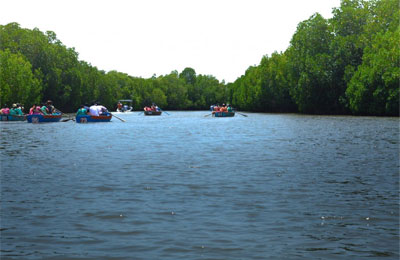 Pichavaram is a village near Chidambaram in Cuddalore District, Tamil Nadu, India.It is located between the Vellar estuary in the north and Coleroon estuary in the south. The Vellar-Coleroon estuarine complex forms the Killai backwater and the mangroves that are permanently rooted in a few feet of water.It is open also on sunday.

Mangrove forests Pichavaram consists of a number of islands interspersing a vast expanse of water covered with mangrove forest. Pichavaram mangrove Forest is the second largest mangrove forest in the world covering about 1100 hectare of area. It is separated from the Bay of Bengal by a sand bar. The biotope consists of species like Avicennia and Rhizophora. It also supports the existence of rare varieties of economically important shell and finfishes. Fauna The mangroves also attract migrant and local birds including snipes, cormorants, egrets, storks, herons, spoonbills and pelicans. About 177 species of birds belonging to 15 orders and 41 families have been recorded. High population of birds could be seen from November to January due to high availability of prey, coincidence of the time of arrival of true migrants from foreign countries and local migrants from their breeding grounds across India. The availability of different habitat types such as channels, creeks, gullies, mud flats and sand flats and adjacent sea shore offers ideal habitat for difference species of birds and animals. Pitchavaram Boat House, AATC Campus, Killai Post, Chidambaram Taluk, Cuddalore, Tamil Nadu - 608102 LandLine : 04144-249249, Mobile : 9176 995 838 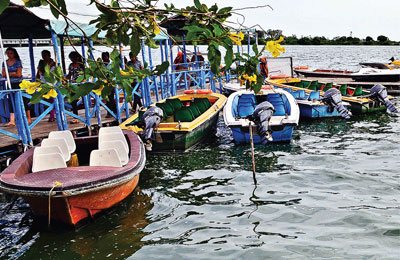 Muttukadu boat house (Tamil: ???????????? ?????? ??????) is a water sport facility on the East Coast Road at Muttukadu, Chennai, India, offering rowing, wind surfing, water skiing, and speedboat riding. It is a backwater area of the Bay of Bengal located 36 km from the city centre and 23 km from Adyar on the way to Mamallapuram. The boat house was inaugurated in 1984 and has 15 row boats, 27 speedboats and 9 pedal boats, besides two high-speed aqua scooters.The water depth varies between 3 ft and 6 ft. It is owned and operated by the Tamil Nadu Tourism Development Corporation (TTDC). The boating spot receives more than 4,000 visitors every weekend. 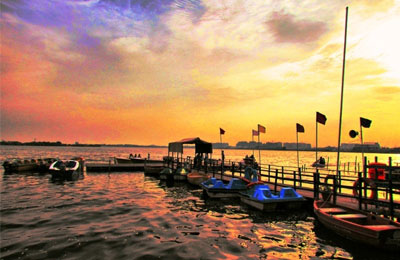 Mudaliyarkuppam Boat House also known as Raindrop Boat House, is a water sport facility located on the East Coast Road, 36 km to the south of Mamallapuram and 92 km from Chennai in India. It was developed by the Tamil Nadu Tourism Development Corporation on the Odiyur lake back waters.It has rowing, cruising, speed boating, waters cooting and kayaking facilities. 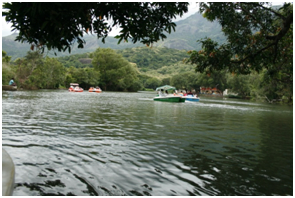 Courtallam or Kuttalam, Spa of South India, is a panchayat town situated at a mean elevation of 160 m (520 ft) on the Western Ghats in Tenkasi district of Tamil Nadu bordering to Kollam district, Kerala. Many seasonal and few perennial rivers such as the Chittar River, the Manimuthar River, the Pachaiyar River and the Thamirabarani River originate in this region. The numerous waterfalls and cascades along with the ubiquitous health resorts in the area have earned it the title the Spa of South India.[1] The falls carry a good amount of water only when there is a rain on the hills.

Falls in Courtallam Peraruvi (main falls) the biggest falls in Courtallam, is about 60m high. The flow of water is interrupted by the Pongumakadal, a 19m deep crater and comes down with greatly reduced impact, making a bath safe. In Chitraruvi (small falls), the flow is thin. Here naturally separate places for men and women are there to bathe. At Shenbagadevi falls, the water flows through shenbaga (Michaelia champak) trees. There is also a temple there, dedicated to Shenbagadevi Amman. Shenbagadevi leads to Chitraruvi. About 3 km from this is Thenaruvi (honey falls), 40m high and cascading between two large stones. In places where there is no water, one can see big honeycombs. Thenaruvi is very dangerous and it is restricted for public. But it is very common to see people visiting and bathing in Thenaruvi. Courtallam Boat House ,Ramalayam, Courtallam, Tamil Nadu 627802. LandLine : 04633-283003