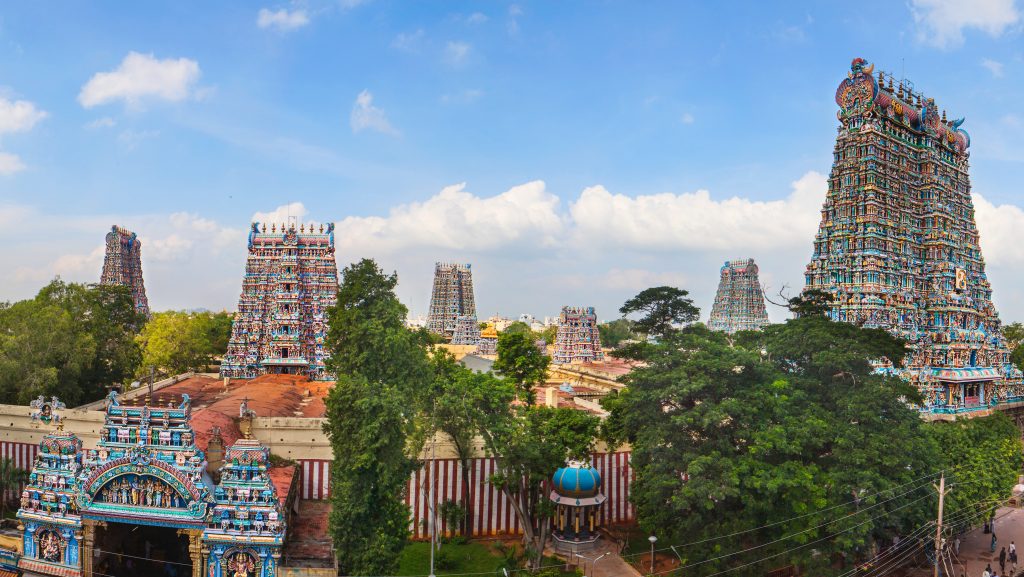 As per legend, the district of Madurai was originally a forest known as Kadambavanam. One day, a farmer named Dhananjaya while passing through the forest, saw Indra worshipping a swayambhu, a self-created Lingam, under kadamba tree. The farmer Dhananjaya immediately reported this to King Kulasekara Pandya. Then Kulasekara Pandya cleared the forest area and constructed a temple around the Lingam. Settlement was also planned with the temple as its centre. On the day of naming the place, Lord Shiva is said to have appeared and drops of nectar from his hair fell there. Thus, the place was named Madurai which means `sweetness` in Tamil language.

The Meenakshi Sundareswarar twin temple is the pivot around which the district of Madurai evolved. The temple grew with the contribution of each dynasty and victorious monarchs, into an enormous complex extending over an area of sixty five thousand square meters. This temple first came in to being about two thousand years ago and was substantially expanded during the regime of Thirumalai Nayak from A.D. 1623 to A.D.1655. Lord Siva in his incarnation as Sundareswarar and his fish-eyed spouse, Meenakshi, are enshrined in this twin temple. There are four massive gateways enclosing these two shrines. Another temple of importance in this district is the Thirupparankundram temple. This temple is situated eight kilometres to the south of Madurai Railway Junction. It is one of the six abodes of Lord Subramanya and its innermost shrine is cut out of a solid rock. kadamba tree Alagar Koil is another major temple situated at a distance of twenty one kilometers to the North-east of Madurai. It is a celebrated Vishnu Temple dedicated to Lord Alagar and situated on a hill amidst panoramic surroundings. The shrine is known as Alagarkoil and the hill is called Solaimalai. The temple also contains a number of beautiful carvings and makes the visit a rewarding experience. Palamudirsolai is one of the six abodes of Lord Subramaniya which is situated atop the Hill.

How to reach Madurai

By Road: Madurai District is well connected with the National Highways NH 7, NH 45B, NH 208 and NH 49 passing through Madurai. The state highways passing through the city are SH-33, SH-72, SH-72A, SH-73 and SH-73A which connect various parts of Madurai district. By Rail: Madurai Junction is the major railway station serving the District. Being the headquarters of the Madurai division of the Southern Railway, there are direct trains connecting Madurai with other major cities and towns across India including New Delhi, Mumbai, Calcutta and Chennai. By Air: Madurai Airport was established in 1957 and is located at Avaniyapuram, about 12 kilometres (7.5 mi) from the city. It offers domestic flights to some cities in India The airport was declared a customs airport in 2012 allowing limited number of international flights and international services to Colombo, Dubai and Singapore. The carriers operating from the airport are Air India, Air India Express, Jet Airways, SpiceJet, Indigo and Srilankan Airlines.

Synonymous with Madurai is the Meenakshi Sundareswarar twin Temple, the pivot around which the city has evolved. The Meenakshi Temple complex is literally a city – one of the largest of its kind in India and undoubtedly one of the oldest too. The temple grew with the contribution of each dynasty and victorious monarchs, into an enormous complex extending over an area of 65000 Sq m. The temple first came in to being 2000 years ago and was substantially expanded during the regime of Thirumalai Nayak(1623-55 AD).

Lord Siva in his incarnation as Sundareswarar and his fish-eyed spouse, Meenakshi, are enshrined in this twin temple. There are five massive gateways enclosing these two shrines. Even a casual visitor is fascinated by the many paintings and sculptures. A striking feature of the temple is the astonishing structure know as “Ayiramkaal Mandapam” or the Hall of Thousand Pillars and each pillar features high, ornate, bold sculptures that look life like. View from any angle these pillars appear to be in a straight line, an architectural masterpiece indeed In the outermost corridors are situated the matchless musical pillars carved out of stones. When it is tapped, each pillar produces different musical note. Timings : The temple is usually open between 0500hrs and 1230hrs and again between 1600 hrs and 21.30 hrs.

Mariamman Teppakulam is a beautiful square tank spread over a huge area of almost 16 acres, located about 4 Kms East of Meenakshi Temple in Madurai City. The tank is the scene of the colourful float festival held in January/February to celebrate the birth anniversary of King Thirumalai Nayak, who built this tank. The deities of Meenakshi and Sundareswarar are placed in a float, called “Teppam”, decorated with flowers and illuminated with hundred of lights. This float is taken around the tank to the sound of traditional music. On the Northern side of the tank a temple is dedicated to Mariamman , a famous village deity of Tamil Nadu.

About 21 Kms North East of Madurai, stands a celebrated Vishnu Temple dedicated to Lord Alagar. The temple is situated on a hill amidst panoramic surroundings. The shrine is know as Alagarkoil and the hill , Solaimalai. The temple also contain some beautiful carvings and makes the visit rewarding. Palamudirsolai, one of the six abodes of Lord Subramaniya is located atop the Hill.

Gandhi Museum is housed in the old Palace of Rani Mangammal, the Gandhi Museum depicts the highlights of the freedom struggle and contains a picture gallery of the Gandhian movement. Also can be seen are a gallery of relics, Khadi and village industries section and South Indian Handicrafts section.

One of the six special abodes dedicated to Lord Murugan or Lord Subrahmanya is located 8 Kms South of Madurai. The importance of this temple is that the marriage of Lord Subrahmanya with Devayanai, the daughter of Indra, was celebrated here. The Cave shrines here are calculated as 8th century creation of the Pandiyans. The Sanctum Sanctorum is carved out of a single rock and the temple is believed to be in existence for many centuries. The walls and the pillars have fascinating carvings.

About 1.5 Kms from the Meenakshi temple, this palace was built in 1636 by the ruler whose name it bears. The imposing edifice is famous for the “Stuccowork” on its domes and impressive arches. The Sorgavilasam (Celestial Pavilion), measuring 75m x 52m, constructed entirely of brick and mortar without the support of a single rafter or girder, is a marvel of Indo-Saracenic architectural style. Among other striking features of the palace are the massive white pillars, several of which line the corridor that runs along the courtyard. Connected by high decorated arches, these pillars measure 20m in height and have a circumference of 4m. Elsewhere, there are polished black stone pillars of varying heights. It was King Thirumalai Nayak’s grandson who demolished much of the fine structure and removed most of the jewels and woodcarvings in order to build his own palace in Tiruchirapalli. (His dream never came true). Thanks to Lord Napier, the then Governor of Madras, who partially restored the palace in 1866-72, and the subsequent restoration works carried out several years ago, today, we get to see the Entrance Gate, The Main Hall and the Dance Hall. There’s daily sound and light show in English at 1845 hrs and in Tamil at 2015 hrs. This half an hour show extols the virtues of King Thirumalai, particularly his passion for arts, his victories in battle and his love for his subjects.